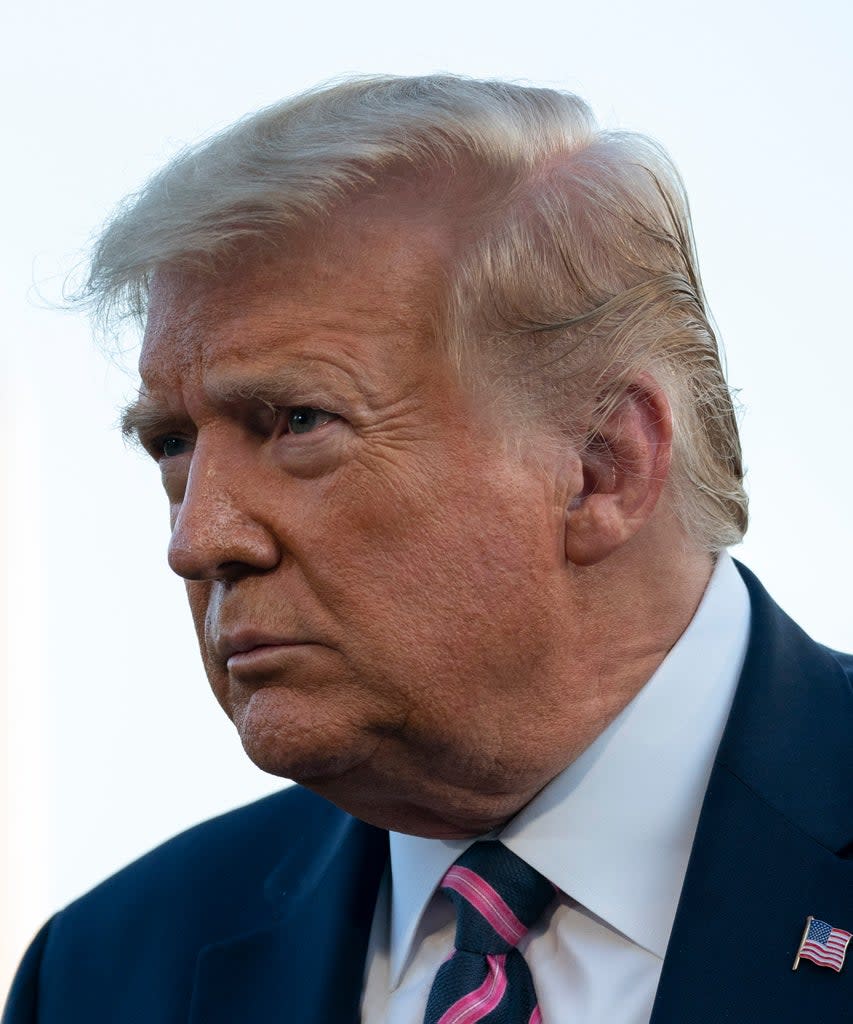 Who among us haven’t taken to Twitter to rage-tweet our way through 2020? On Monday morning, President Donald Trump, who is currently being hospitalized at Walter Reed Medical Center for COVID-19, sent a series of all-caps tweets urging Americans to vote for him because of… Space Force (among other things). In a kind very obvious move to distract from the fact that he purposefully downplayed a global pandemic that killed over 210,000 Americans (and mocked people for wearing masks), the president mystified everyone on Twitter with his latest “VOTE!” series. It seems Trump is succumbing to the boredom and isolation of his luxurious, top-of-the-line hospital stay.

“PEACE THROUGH STRENGTH (BRING OUR SOLDIERS HOME). VOTE!” one inexplicable tweet read. “FIGHT THE CORRUPT FAKE NEWS MEDIA. VOTE!” read another. Trump also attempted to appeal to those who value “law and order” — yes, the same Trump who brags about swindling his way out of paying taxes. Last week, before the White House became a COVID-19 hotzone, The New York Times revealed that in 2016 the self-proclaimed billionaire paid a measly $750 in federal taxes, and $0 in 10 of the 15 previous years.

Trump’s personal physician, Dr. Sean Conley, who just yesterday admitted to omitting details of Trump’s health status and aspects of his care to appear “upbeat,” told the American public Trump has been administered Dexamethasone, a corticosteroid hormone used to treat breathing problems. Three of the many side effects of the drug are increased bouts of “anger,” “aggression,” and “irritability” — and Trump seems to be experiencing all three.

Hypocrisy and lying, however, are not side effects of this president’s COVID-19 treatments. Within his tweeting spree was an appeal to those who want to access healthcare coverage even if they have pre-existing conditions — the Trump administration is currently fighting a case in the Supreme Court that, if they win, will reverse the Affordable Care Act and allow health insurance companies to deny coverage to those with pre-existing conditions. Trump also attempted to appeal to those who fancy themselves pro-life, because there’s nothing more “pro-life” than letting more than 210,000 Americans die before you “learn” about a deadly disease.

Trump will likely survive his COVID-19 diagnosis, courtesy of the federally funded health care he didn’t pay for. The lying, however? The hypocrisy? The only way to get rid of that will be to vote him out of office on Election Day.

Like what you see? How about some more R29 goodness, right here?

Donald Trump Has COVID-19. What Happens Next?

What Trump Did The Days Before He Tested Positive