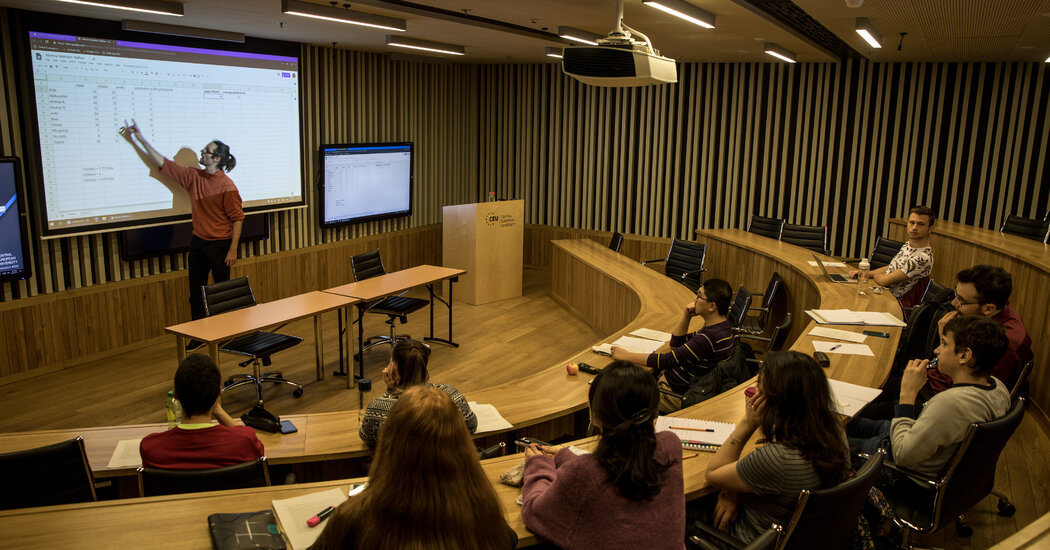 BUDAPEST — The European Court of Justice ruled on Tuesday that Hungary had violated E.U. rules by changing legislation in 2017 that effectively expelled an American university founded by the billionaire financier George Soros from the country.

“The conditions introduced by Hungary to enable foreign higher education institutions to carry out their activities in its territory are incompatible with E.U. law,” the court’s ruling said.

The decision was the latest effort by the European Union to curb growing authoritarianism by the government of Prime Minister Viktor Orban, but is unlikely to have much impact on the ground in Hungary.

The ruling leaves no room for appeal, and requires Mr. Orban’s government to change the legislation to come in line with E.U. laws. If Hungary does not amend the law, the European Commission, the bloc’s executive arm, could request that the high court impose fines on the Hungarian government until it does so.

But the expelled institution, Central European University, is unlikely to restore its former setup in Hungary. Michael Ignatieff, the university’s rector, has said that it will be anchored in Vienna, where it has moved the bulk of its operations.

“We cannot return to Hungary, because its prevailing laws don’t meet the requirements of academic freedom,” Mr. Soros said in a statement on Tuesday. “The Hungarian government continues to trample E.U. law, with the latest victim being the world-renowned University of Theatre and Arts,” he added, referring to a Hungarian university that was the site of student protests last months over the increasing influence of Mr. Orban’s government in the school’s affairs.

Andras Lederer, a program coordinator with the Hungarian Helsinki Committee, a human rights organization in Budapest, said the Central European University case highlighted the need for the European Commission to step in early and suspend legislation it objected to until the bloc’s high court could give a ruling on the matter.

“If that would have happened in the case of C.E.U., the university would still be here,” he said.

The new legislation essentially stripped the university of its ability to grant U.S. diplomas in Hungary, thereby largely preventing it from being able to operate within the country. Central European University currently conducts only a few academic and archiving activities in Budapest.

In its ruling on Tuesday, the European Court of Justice said that the law’s requirements constituted “a means of arbitrarily discrimination” against institutions like Central European University.

Mr. Orban’s government has vigorously defended the legislation, with one minister saying in 2017 that it was not in Hungary’s interest “to allow international influence attempts aimed at making life difficult for the democratically elected government or president.”

Mr. Orban, whose coalition has controlled Hungary’s government since 2010, was a rising liberal politician during the country’s democratic transition in the early 1990s. He even received a scholarship from Mr. Soros in 1989 to study at the University of Oxford. But his political ideology turned to the far right over the next three decades.

When he assumed power in 2010, he and his allies overhauled the country’s democratic framework, rewriting election laws to favor their party and consolidating control over the courts and much of the news media. The restructuring has extended into education and culture, and has included crackdowns on human rights groups. The state’s huge media system fuels conspiracy theories and far-right nativist messaging.

Mr. Orban also set his sights on Mr. Soros, an American of Hungarian origin, and his philanthropic efforts in Hungary, which includes funding for Central European University as well as an array of nongovernmental organizations, many of them involved in the promotion of democracy.

“The next year will be about squeezing out Soros and the powers that he symbolizes,” Mr. Orban said in December 2016.

To Central European University faculty members and their students, the past decade has been a painful reminder of how fragile democracy is — even in the European Union, which Hungary joined in 2004.

Professor Zoltan Miklosi, the chair of the university’s political science department, now commutes between Budapest and Vienna, where he teaches classes at the new campus. He said he could not have imagined 20 years ago that democratic backsliding would be an issue in the European Union.

He noted that Mr. Orban had initially focused on taking control of legal and constitutional structures in Hungary, whereas “what is happening now is going down to the more granular level,” including the cultural, academic and media spheres.

The European court’s ruling reflects growing concern in the bloc over the state of democracy in countries like Hungary and Poland. The European Parliament has been pressing to link E.U. funding to adherence to the rule of law, an issue of increasing concern in Hungary as it grapples with the economic effects of the coronavirus pandemic.

But the judgment is unlikely to bring significant change within Hungary, Mr. Miklosi said.

“I think the E.U. was totally asleep at the wheel in the beginning,” he said. “By the time the E.U. sort of woke up to the seriousness of the problem, from Hungary’s point of view, it was clearly too late.”