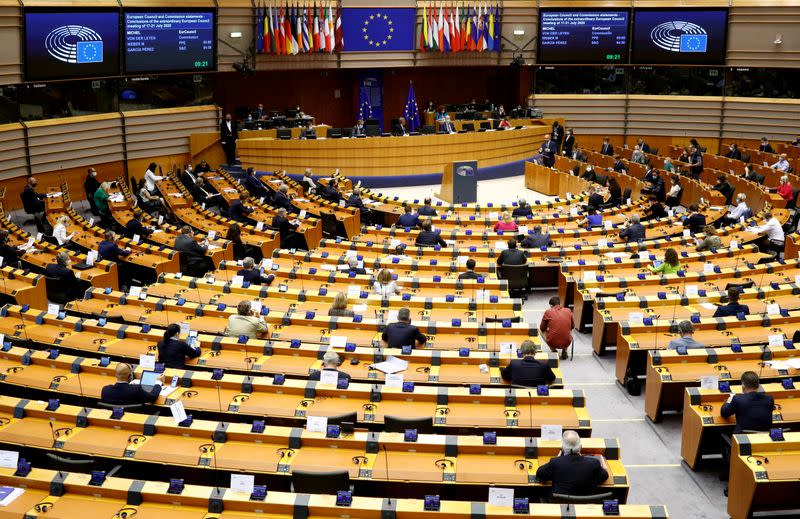 BRUSSELS (Reuters) – Lawmakers in the European Parliament expect a tight vote on Tuesday on the European Union’s new climate target for 2030, with support splintered over the bloc’s green ambitions.

The assembly will vote in the evening on a landmark bill to make EU climate targets legally binding. The most contentious part is a new target for emissions cuts this decade.

The EU’s current goal is to cut greenhouse gas emissions by 40% by 2030, against 1990 levels. That needs upgrading if the bloc is to become climate neutral by 2050.

The European Commission last month proposed a 2030 emissions cut of “at least 55%”, which it said was economically feasible but would require tougher policies for many sectors, including tighter car emissions standards and higher carbon costs for industry and airlines.

The European Parliament’s environment committee last month voted for a 60% cut target for 2030, and groups representing just under half of the assembly said they would back this goal on Tuesday. Some officials said enough extra votes had been secured for a razor-thin majority.

“I think we have a historic opportunity to take the climate policy to higher levels,” said Sweden’s Jytte Guteland, lead lawmaker on the issue.

“It will be a very tight result,” said Pascal Canfin, chair of Parliament’s environment committee.

Conservative lawmakers are meanwhile rallying behind a proposal by the centre-right European People’s Party (EPP) to cut emissions by at least 55% this decade.

“The 60% is stretching too much,” German EPP lawmaker Peter Liese said, adding that he was “quite optimistic” his proposal would gain majority support.

Some Green lawmakers said they could support a 55% goal, but took issue with EPP’s plan to count carbon sinks – emissions absorbed by forests – and carbon credits from overseas projects towards the target.

“That is a clear red line for us,” Green lawmaker Bas Eickhout said.

The split in Parliament reflects broader divisions among the EU’s 27 countries, which must also approve the 2030 goal.

Wealthy western and northern countries largely back an emissions cut of at least 55%, while others oppose tougher climate policies that could hit their strategic economic sectors, such as coal mining in Poland and automobile manufacturing in the Czech Republic.