On Sunday, Justice Minister Gideon Sa’ar tried for the umpteenth time to put to rest rumors that he is in talks with the Likud party for an alternate government.

“There are no negotiations with Likud,” he told reporters as he strode into the weekly cabinet meeting in Jerusalem. “You can drop the subject. I hear the news and every morning there’s some new spin. I am not going back into Likud.”

On Monday he told Kan news: “We will not restore [Netanyahu]. Israel needs to march forward, not backward.”

Exactly one year ago, Sa’ar managed to put similar rumors to bed for good — or so he thought — when his New Hope party and seven others banded together to form a government led by Yamina’s Naftali Bennett. It was a fragile alliance to be sure — there were irreconcilable differences built in that weren’t going to go away — but one that featured unprecedented right-to-left cooperation, and the first major Arab party to ever join a ruling coalition, an audacious experiment in building bridges to span the chasms wrought by years of divisive politics.

But a year later, there’s not much left of those bridges other than the dysfunctional remnant of Bennett’s swiftly decaying government. In an interview with The Times of Israel Sunday, Sa’ar laid into his partners for what he said were legislative missteps in the past, and for not doing enough to keep the band together now.

“The party leaders showed no commitment even though we were very close. We missed an opportunity for a bill that was a cornerstone for this government,” he said of a sunk bill he had championed that would enact a term limit for the prime minister.

Yet Sa’ar continued to hold out hope for the survival of the government, while also prophesying its imminent demise.

“I did not give up on the government. In political life, a person has to do everything he can for the cause he believes in, but not everything is always up to you,” he said. “It is possible to hold a coalition with 60 MKs [lacking a majority in the 120-seat Knesset], but only if the 60 members are disciplined. Unfortunately, that is not what has been happening in recent weeks.”

The refrain has been a frequent one from the 55-year-old former Likud minister in recent weeks, as he has struggled to push through legislation to renew emergency measures that extend certain Israeli legal provisions to West Bank settlers, which are due to expire in weeks. His efforts have been stymied by members of his own coalition — both the Knesset members who buck party discipline to oppose the measure, and the parties that refuse to enforce that discipline. Coupled with the opposition’s staunch stance of opposing all coalition legislation regardless of ideological merit, the bill has little chance of passing.

Some have questioned the political sense in making a losing battle into a do-or-die fight. But others have surmised that by choosing this as his hill to die on, Sa’ar has given himself a leg up with right-wing voters. He dismissed the idea as “nonsense.”

“This is not my choice at all, but these are the regulations that are about to expire. The implications of their expiration are more critical than any other legislation,” he said. “The opposite is true: I have shown excessive patience to reach a solution; I have postponed the vote for four weeks.” 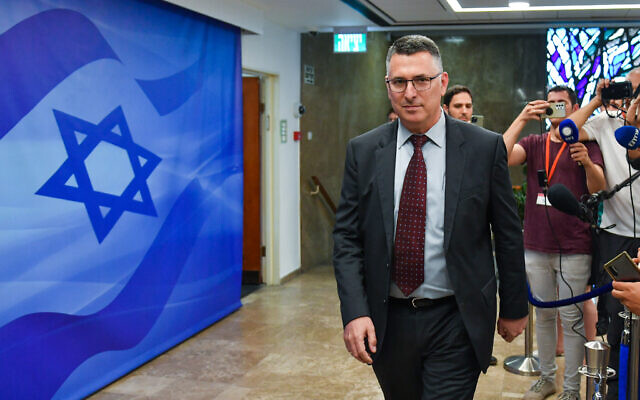 The Times of Israel’s conversation with Justice Minister Gideon Sa’ar was conducted in Hebrew. It has been edited for clarity and brevity.

Do you expect the 24th Knesset to disperse during this summer session?

The 60-member coalition will have to wake up or we will be headed in the wrong direction. Ultimately there are also actions that party leaders need to take. I’m talking about parties where there is one MK who has decided not to vote with the coalition, like Meretz or Blue and White. It is not enough to merely say that it is important for this government to exist but not to accompany it with actions.

Are you referring to Meretz head Nitzan Horowitz needing to do more to oust MK Ghaida Rinawie Zoabi and Ra’am head Mansour Abbas needing to push out MK Mazen Ghanaim, and what of Blue and White head Benny Gantz needing to deal with his rebel MK, Michael Biton?

I’m not grading my fellow ministers. I’m just asserting that wherever there is a breach of discipline, a party leader must take responsibility and resolve it. It is impossible to continue with a “co-opposition” — this new invention, an opposition within a coalition.

State Prosecutor Raz Nizri said that if the measure does not pass, Israeli prisons will not be allowed to hold some 3,000 Palestinian inmates. Is that at the heart of the matter?

Is it not possible to have a political partnership with an Arab party? They opposed bills giving scholarships to soldiers and the citizenship unification bill, but backed budget allocations to the Arab community.

It will be very sad, but that may be the conclusion if we do not succeed in passing this bill. No one has a problem voting for things you agree with. A coalition must also vote for issues you do not agree with. It is not a lost cause. I know that Mansour Abbas is trying to get order in Ra’am.

You blame parties on the left and Ra’am, but when has your party had to vote against its ideology? Don’t right-wing parties have more political maneuverability, while left-wing ones are always forced to compromise and conform?

We had to vote against our wishes in many cases, mostly on privately initiated bills. There have been a lot of well-intentioned social bills that benefit the citizens and we would like to vote for them, but there is coalition discipline and there are budget constraints, so we could not.

As for the claim that the leftists are always the ones making concessions, it’s just the opposite. Most of the opposition factions are on the right, and there is a lot of friction between us. They are putting forward bills that we would love to support, but we can’t.

Polls show you having trouble getting back into the Knesset if elections are held. Is there a possibility New Hope would join forces with Yamina next time?

That’s not an option. New Hope will run as before under my leadership and our plan has not changed. According to the polls, we have no problem [passing the electoral threshold]. There is a Likud campaign that the media has decided to echo, saying that we have issues, but in real life there’s no problem. We will run as New Hope and will succeed.

In the last election, you were sharply committed to the mantra that “whoever wants Netanyahu as prime minister should not vote for me.” Did you base that on polling that showed a defined group of right-wing voters who were done with Netanyahu, but now this group has moved on?

My position was not based on a survey, but stemmed from a position of principle and values, ​​and a perception that the previous government had to be replaced. On the contrary, I am convinced that I lost some votes because I was clear on this matter. It was important to me to stress that. I did not want to be in a post-election position where supporters tell me that they have been deceived. During the election, I was speaking about a “change government” and a coalition composition that is different from what we were used to.

It is true that there is a slice of the public that used to back the right-wing parties in the coalition but no longer does so, according to opinion polls. That’s a fact. I think we, too, have not always been good at explaining our achievements to the public. But when you believe in something, you go with it.

I think the current government is basically better than the alternative. Our partners on the left may be the ones to bring it down, and it would be a shame, but it could happen.

Still, thinking about last year, if I had the choice I would make the same decision.