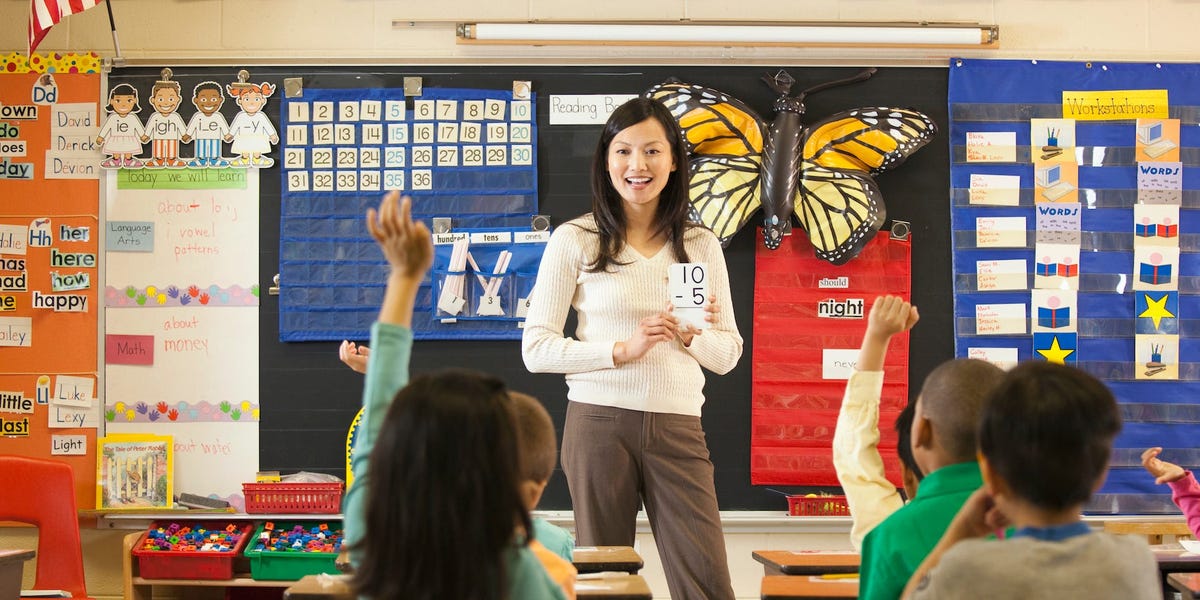 States are seeing enormous budget shortfalls because of the coronavirus pandemic, and the consequences for teachers and other public school employees could be dire. At least 640,000 education jobs in state and local government vanished between February and August 2020.

The states, which provide an average of about 47% of US public school funding, are cutting school spending because their tax revenue is declining and they have no easy recourse to balance their budgets; unlike the federal government, states can’t just print money.

Negotiations continue around another pandemic relief bill, which would include money for states to spend on public education. But lawmakers have passed no measures since May, when the House of Representatives passed a $3 trillion coronavirus relief bill that stalled in the Senate.

We study families, employment, corporations — and gender. We are tracking how the coronavirus pandemic is underscoring the disproportionate financial burden women bear when states slash their budgets in times of recession.

Without sufficient federal aid, recessions have historically prompted job losses, pay cuts, and high turnover that burden school districts for years. Because most public school teachers are women, they are affected more.

We are examining this issue and others more deeply in a book we are writing called “Shafted: The Fate of Women in a Winner-Take-All World.” It explores the jobs women do from public schools to Walmart or hedge funds and demonstrates that the forces that have produced a highly unequal economy have undermined women’s well-being.

What we’ve found so far is that women in almost every field have lagged behind men in pay, promotions, and leadership opportunities. And in K-12 schools, this issue can appear starkly.

Historically, the federal government has implemented policies aimed at keeping the economy afloat during recessions.

During the Great Recession, for example, the 2009 stimulus package included money that cushioned the impact of the recession on the states. Economists largely agree that the policy worked. The spending bolstered state budgets, helping to prevent massive layoffs and prompt the start of a recovery.

Nationwide, education spending averages about 30% of state budgets, with two-thirds of the funds supporting K-12 education. More specifically, the average state expenditures are 21% on elementary and secondary education and 10% on higher education.

After Republicans swept Congress in 2010, however, the flow of federal aid related to the recovery was dramatically reduced. There was an immediate impact on the nation’s schools. Collectively, the states spent billions less in K-12 education in 2012 than they had in 2011.

As of the 2017-18 school year, 12 states were still spending less on K-12 education than a decade earlier. In their communities, fewer teachers were employed and schools were scrimping on school maintenance and supplies. Many public school teachers’ wages stagnated and their pension benefits were cut.

In these conditions, the most experienced — and expensive — teachers can be forced out. These are often women.

During recent decades of squeezed state budgets, the percentage of K-12 teachers who are women has grown, rising to 76% in 2018 from 67% in 1981. Therefore, the refusal to fund state budgets has fallen disproportionately hard on women.

Today, teachers earn about 21.4% less than people with the same level of education do in other fields, the highest teaching wage penalty economists have recorded in US history. Female teachers also earn lower salaries than male teachers.

We believe the low pay and relatively low status of teaching help explain the increasingly high percentage of women in teaching and the declining percentage of men who join their ranks.

We see a solution. It is for countercyclical assistance — giving more government assistance when times are tough — to the states, and making this support automatic. Other financial stabilizers, such as unemployment insurance and the SNAP nutritional support program, already do this by rising during downturns, which also has the effect of bolstering the national economy.

That won’t happen, however, without greater political recognition that the federal role in state budgets is essential to the health of public schools — and the national economy.

Schoolteachers have begun to fight back, engaging in strikes over the past few years for better pay, better working conditions, smaller class sizes, and more services — such as guidance counselors and nurses — for students.

The strikes, however, address pressing local issues, not the broader — and, we argue, more critical — role the federal government plays during downturns in school budgets. That requires making the connection among congressional action, the nation’s economic well-being and the health of its educational system much more visible.

This article is republished from The Conversation under a Creative Commons license. Read the original article.