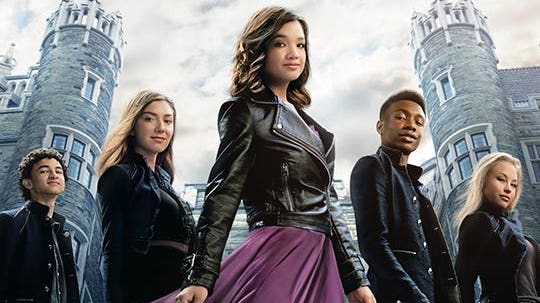 Along with High School Musical and Descendants, The Secret Society of Second-Born Royals may be yet another example of Disney Channel beating Disney’s theatrical departments in the arena of new live-action movie franchises.

The Secret Society of Second-Born Royals was, over the weekend, the most-watched movie on Disney
+, and the second most-watched item behind The Simpsons (yes, The Mickey Mouse Club is in the top three, as always). It’s less broad and patronizing than the first Descendants movie (the sequels got better when the kids took center stage over the vamping adults) but less “This is unlike anything we’ve seen in a while” than that first High School Musical. Moreover, it makes the classic franchise mistakes of A) existing as a glorified TV pilot and B) taking a story that doesn’t need to be a superhero story and turning it into a superhero story. Nonetheless it is likely another example of how The Disney Channel has succeeded in the one area where their theatrical departments have mostly failed.

Bob Iger was officially Walt Disney’s CEO from 2005 to early 2020, and it was his tenure, especially the back half, during which Walt Disney rose like a phoenix to become a dominant entertainment empire, especially in terms of theatrical moviegoing. In an era when audiences began to gravitate to IPs and marquee characters over movie stars and new-to-you high concepts, Iger’s choice to purchase Pixar, Marvel, Lucasfilm and eventually Fox
studios proved a canny way to consolidate many of the biggest cinematic IPs under one umbrella. But one area where Iger’s rule fell painfully short was in the realm of new live-action theatrical franchises. Most of Disney’s biggest hits were animated adventures, live-action revamps (or outright remakes) of their prior animated gems and the post-Avengers MCU along with the new generation of Star Wars movies.

Walt Disney hasn’t had a new live-action theatrical franchise since National Treasure in 2004, which they allegedly decided not to pursue past 2007’s blockbuster Book of Secrets due to the Nicolas Cage historical scavenger hunt’s lesser potential for merchandise and related monetization. A year before that, they hit pay dirt with Gore Verbinski’s Pirates of the Caribbean: Curse of the Black Pearl, a $654 million-grossing supernatural pirate adventure that was as trendsetting to the industry as Harry Potter, Shrek and Spider-Man. The Mouse House spent several years trying to replicate that seemingly boy-driven success (RIP The Lone Ranger, John Carter, Prince of Persia and Tron: Legacy), before reverting their energies to women and girls, the same demographic (generally speaking) that helped make the above-noted franchises (along with Paramount’s early MCU movies) into global blockbusters.

Yes, Iger’s theatrical domination has mostly been about acquisitions and nostalgia. To be fair, some of that is about viewing habits. The demographics that once might have gone to a new movie just to see a new movie have shifted to streaming and VOD. If more of you showed up for Tomorrowland and A Wrinkle in Time, Disney would still take swings of that nature alongside the safer Katzenberg-era remakes. Conversely, the Disney Channel (and that includes Disney XD and the various off-shoots) has found more than its share of success creating wholly original (or new-to-you adaptation) feature films that have themselves spawned successful (and merchandise-friendly) franchises. Presuming it continues to pull in viewers, The Secret Society of Second-Born Royals (that’s a mouthful) will join High School Musical and Descendants as new live-action movie franchises.

Kenny Ortega’s High School Musical made stars out of Zac Efron, Vanessa Hudgens and Ashley Tisdale while revitalizing the entire Disney Channel original movie brand. High School Musical 2 debuted on the Disney Channel in 2007 with 17.2 million viewers, a record at the time for a basic cable premier and the TV equivalent of a “breakout sequel.” High School Musical 3 would play in theaters and earn $253 million worldwide in late 2008, which seems beyond comprehension today. Descendants, also directed by Ortega, was a high school musical fantasy about the children of Disney’s heroes and villains and how they eventually learned to get along despite generational prejudices and expectations. Descendants 2 would premiere in July of 2017 on six Disney-owned channels simultaneously and snag around 13 million live viewers and 5.5 million in week-of DVR viewings.

We may never know how many Disney+ subscribers watched the Disney Channel-produced The Secret Society of Second-Born Royals. Moreover, while it was produced by The Disney Channel it exists as a Disney+ streaming exclusive. Directed by Anna Mastro and penned by Alex Litvak, Andrew Green and Austin Winsberg, the flick deals with, as the title declares, the second-born kids of the various kingdom-ruling families, along with the revelation that they will live out their days as secret superheroes while their siblings rule in public. So after an awkward and not-entirely-convincing opening reel showing off how Peyton Elizabeth Lee’s Sam is rebelling against her own family’s monarchy via generic music in the streets, the film picks up steam once she joins four other kids who are seemingly in summer school but are actually to be trained as superheroes.

Skylar Astin injects a deadpan energy into the proceedings as their (openly gay and gluten intolerant) professor. Moreover, the kids, overly friendly January (Isabella Blake-Thomas), socially awkward Matteo (Faly Rakotohavana), conceited Tuma (Niles Fitch) and social networking Roxana (Olivia Deeble), have strong interactional chemistry, even if their arcs and journeys are pretty Mad Libs. Yes, there’s an old villain who just broke out of jail. Yes, Sam is going to uncover some family secrets. And yes, their mentor is going to be temporarily removed from the equation so that the kids must rely on themselves to save the day. The film works on its own terms, occasionally feeling like a reworked version of a rejected pitch for a Sky High sequel. But the adherence to the superhero formula proves a detriment, artistically and visually.

That 2005 theatrical hit ($86 million on a $35 million budget) was a trendsetting high school melodrama about teen superheroes and their super powered family legacies. Secret Society of Second-Born Royals is just surfing a trend. Moreover, while Descendants gave its main cast (including Dove Cameron, Cameron Boyce, Booboo Stewart and Sofia Carson) distinctive wardrobes and cosplay (or Halloween) friendly costumes, our royal superheroes do battle in generic track suits. Like Blumhouse’s doomed Jem and the Holograms movie, our protagonist looks more distinctive in her civilian life than as her fantastical alter-ego. Considering how often Disney’s musical romance remakes score as counterprogramming to superhero/action flicks (Beauty and the Beast, Aladdin, etc.), they need not play in the same doomed sandbox as their rivals. That said, there’s something bemusingly indulgent about Disney crafting characters who are both princesses AND superheroes.

Presuming it inspires a sequel or two (Descendants 3 was a relative TV success last summer), it’ll be another example of The Disney Channel (courtesy of soon-to-be-departing Nancy Kanter) beating Disney’s theatrical departments in a arena of crafting new live-action (and arguably monetizable) feature film franchises when it seemed all-but-impossible for Disney’s theatrical departments to hit that nail outside of Kevin Feige’s Marvel Cinematic Universe. I’d have expected Jaume Collet-Serra’s Jungle Cruise, starring Dwayne Johnson and Emily Blunt, to be the first such success since National Treasure, but it was delayed from this July to next July so the jury’s still out. And if Disney+ and straight-to-streaming content is really going to be Disney’s focus over the next decade (aside from guaranteed blockbuster IP), then The Secret Society of Second-Born Royals may be the future.