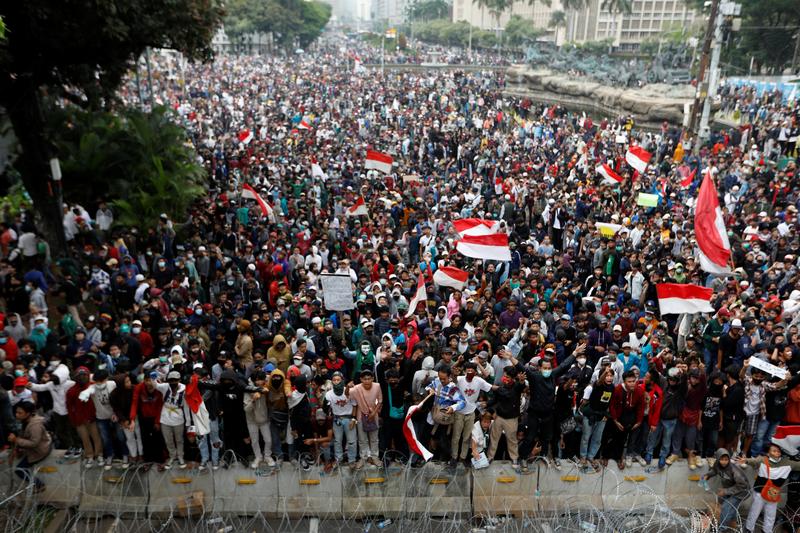 “People can’t go out, some people can’t even eat and unemployment is still high,” he told Reuters in Jakarta. “Even my son still can’t find a job.”

Protests against the so-called omnibus law took place in multiple locations involving thousands of Indonesians last week, some of which saw streets blocked, tyres burned and rocks hurled, leading to more than 6,000 people being detained.

“The bill will definitely affect myself, my job, my relatives, my friends and everything,” said engineer Rafi Zakaria, 30.

“It doesn’t only affect labourers. Our students here joined the protest because they’re concerned about their parents’ jobs.”

The law, designed to reduce red tape and attract investors, has yet to be published and the unofficial versions circulating in the media and online have led to speculation and confusion.

Deputy house speaker Achmad Baidowi told Reuters the law would be sent to the president and made public on Wednesday.

The government is standing by the legislation and President Joko Widodo has blamed the public outcry on disinformation. Indonesia’s defence minister has blamed the demonstrations on “foreign interference”.

“There are those who do not want to see Indonesia as conducive to investors, and want to always benefit from that,” the ministry spokesperson, Dahnil Anzar Simanjuntak, said, without elaborating.