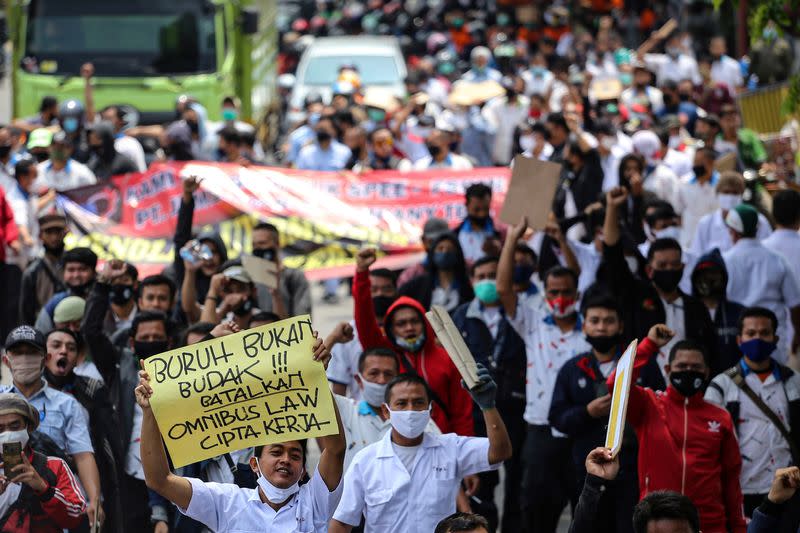 JAKARTA (Reuters) – Indonesian police used water cannons and tear gas on Tuesday to disperse protesters rallying against a new jobs law in two cities on the island of Java, according to a police spokesman and media reports.

Earlier, thousands of workers and students had protested peacefully across the archipelago at the start of a three-day national strike against President Joko Widodo’s “omnibus” Job Creation bill, which was passed into law on Monday.

Elshinta radio posted a video on its official Twitter account showing police late in the evening using water cannons against hundreds of protesters in the city of Serang in Banten province, about 70 km (43.5 miles) to the west of Jakarta.

Banten police spokesman Edy Sumardi Priadinata said via text message that the situation was under control by 9:15 pm local time and that two police officers had been injured by rocks thrown at them, but did not respond to further queries.

In Bandung, the capital of West Java province, police used tear gas against protesters who hurled rocks and fire crackers and damaged a police car, according to news website Detik.com.

The spokesman of West Java police could not immediately be reached for comment.

There was no significant demonstration in Jakarta. Police blocked workers from protesting in front of the national parliament, citing the need to contain the spread of the coronavirus.

Critics of the omnibus law, which revises more than 70 existing laws to accelerate reform of Southeast Asia’s largest economy, say it is too pro-business with its removal of labour protections and relaxation of environmental rules.

Indonesian markets cheered the passage of the bill, with the main stock index <.JKSE> up as much as 1.31% and the rupiah <IDR=> reaching as high as 1.28%, before paring some gains.

The Indonesia Investment Coordinating Board, a government agency, said it would lead to better welfare for workers by facilitating more foreign investment.

Citibank, in a research note, said the law simplifies business licensing and addresses restrictive trade and labour policies, but added that immediate foreign investment was unlikely in the currently depressed global economic climate.

Trimegah Securities economist Fakhrul Fulvian said banks and export-oriented industries should benefit from the law, while consumer and retail sectors may be pressured as workers may increase savings to compensate for changes in labour rules.

However, many Indonesians criticised the law on Twitter, with one trending hashtag incorporating an expletive against parliament and another calling lawmakers traitors.