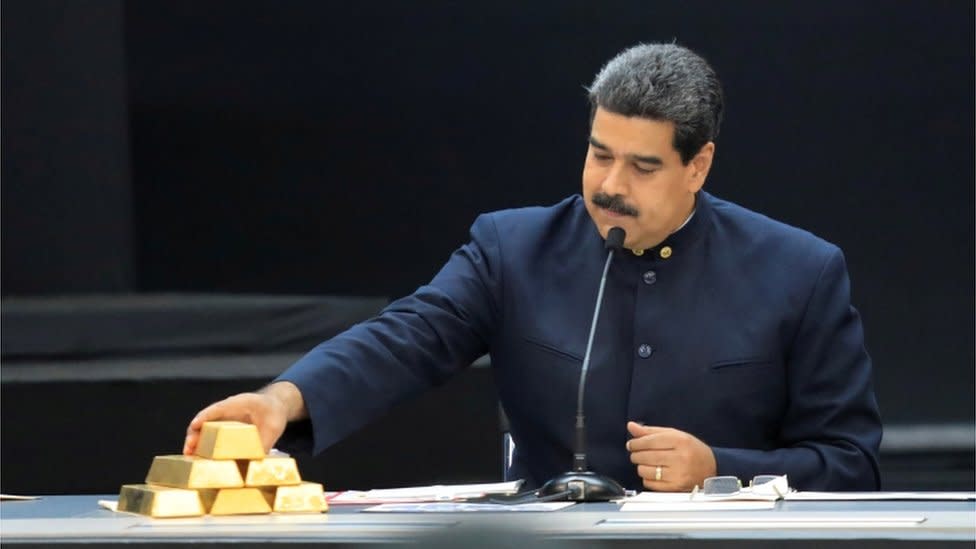 A British appeals court has overturned a judgement which said the UK had recognised opposition leader Juan Guaidó as Venezuela’s president.

The ruling is a victory for Nicolás Maduro, who was re-elected to a second term as president in a 2018 election widely dismissed as rigged.

At the heart of the legal battle is the question of who controls $1bn (£773m) of gold stored in the Bank of England.

The case now goes back to the High Court.

What did the appeals court say?

Judge Stephen Males on Monday set aside the judgement by the High Court in July which had ruled that the UK had “unequivocally recognised opposition leader Juan Guaidó as president”, rather than President Nicolás Maduro.

In his ruling in July, High Court Judge Nigel Teare had said that there was “no room for recognition of Mr Guaidó as de jure president and of Mr Maduro as de facto president”, meaning that even though Mr Maduro remained in charge in the presidential palace in Caracas, the UK government had decided to recognise Mr Guaidó.

But Judge Males said that the UK’s recognition of Mr Guaidó “is to my mind ambiguous, or at any rate less than unequivocal”.

How did British courts get involved in the first place?

The government of Nicolás Maduro launched legal action against the Bank of England (BoE) earlier this year to try to force it to release $1bn-worth of bullion Venezuela has stored in the BoE’s vaults.

Despite the country’s oil riches, Venezuela’s economy has been in freefall for years due to a combination of government mismanagement and corruption, further exacerbated by international sanctions.

As Venezuela produces very little apart from oil, it needs to import goods from abroad, for which it needs access to foreign currency – or gold.

The BoE argued that it was caught in the middle of two rival claims for the gold, one from the government of Mr Maduro and one from Juan Guaidó, who declared himself acting president of Venezuela last year and is recognised as such by more than 50 nations, including the UK.

Mr Maduro’s government said it wanted the gold to fund its fight against the coronavirus pandemic. But Mr Guaidó asked the Bank of England not to hand the gold over to the Maduro government, arguing that it would be used for corrupt purposes.

The Bank of England therefore asked the High Court to rule on whom the UK government recognises as Venezuelan president, Mr Maduro or Juan Guaidó.

The High Court ruled in favour of Mr Guaidó, but lawyers for the government of Mr Maduro lodged an appeal, which they have now won.

The case will now go back to the High Court, which will have to determine more clearly who is in charge in Venezuela.

It is likely that the UK’s Foreign Office will be urged by the High Court to take a clearer stance on whom it recognises.

The legal battle over the gold therefore seems likely to drag on.