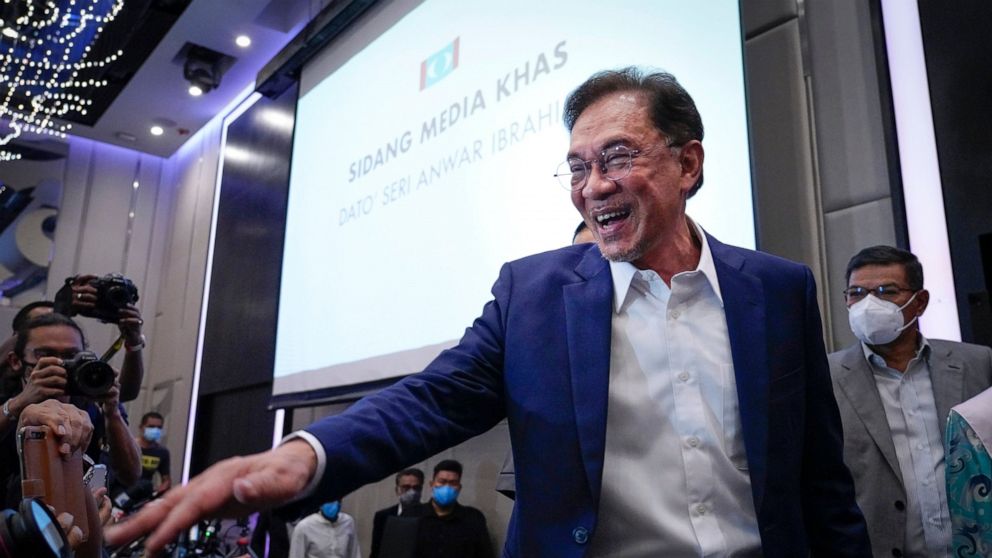 KUALA LUMPUR — Malaysian opposition leader Anwar Ibrahim was to meet the nation’s king Tuesday in a bid to form a new government after claiming he had secured a majority in Parliament.

Anwar said last week that he would present the monarch with “strong and convincing” documentary evidence of the support he has from lawmakers, which would allow him to unseat Prime Minister Muhyiddin Yassin.

Anwar spent about an hour at the palace before leaving. He did not speak to reporters gathered at the gate.

Muhyiddin, who took power in March after securing enough support in Parliament to unseat Anwar’s reformist alliance, has dismissed Anwar’s claim to a majority. Muhyiddin currently boasts a slim two-seat majority and has been grappling to maintain support amid infighting in his coalition.

Allies in Muhyiddin’s ruling coalition have denied supporting Anwar, and branded Anwar a “desperado” for seeking to wrest power as the country struggles with the coronavirus.

The audience with the king was slated three weeks ago, but postponed as the king was hospitalized. Anwar has been tight-lipped and said he would only reveal details after meeting the king.

“I frankly do not think it will be a smooth and easy ride for Anwar. For one, even if the king is convinced of Anwar’s command of parliamentary majority, the king still has the alternative constitutional option of dissolving the parliament,” said Oh Ei Sun, a senior fellow at the Singapore Institute of International Affairs.

Oh, a Malaysian, said support for Anwar could also have waned as Muhyiddin’s camp may have lured back defectors in the past three weeks.

Before leaving home Tuesday morning, Anwar tweeted a picture of himself and his wife. “Hopefully it will be a smooth affair today,” he wrote.

Anwar’s Alliance of Hope was elected in 2018 but collapsed after Muhyiddin withdrew his party and tied up with opposition parties to form a Malay-centric government in March. Then Prime Minister Mahathir Mohamad resigned in protest, saying he wouldn’t work with parties accused of corruption that he ousted in the 2018 polls.

If Anwar succeeds, it will mark a dramatic comeback after his roller-coaster political journey since the 1990s.

Once a high flyer in the ruling party, Anwar was convicted of homosexual sodomy and corruption after a power struggle with Mahathir in 1998. He was imprisoned for a second time for sodomy in 2014.

Anwar and his supporters have long denied the sodomy allegations, saying they were concocted to destroy his political career.

Rather than give up, Anwar ended his feud with Mahathir from his prison cell to forge a the Alliance of Hope, which in the 2018 polls defeated the coalition that had led Malaysia for 61 years.

Mahathir became premier a second time. Anwar was freed with a royal pardon days after the polls and was Mahathir’s designated successor before their alliance fell apart.