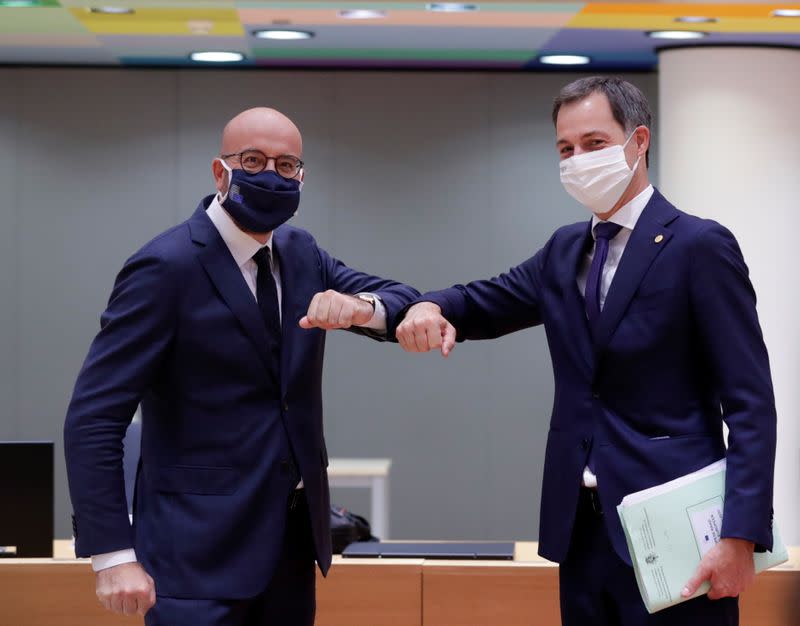 BRUSSELS (Reuters) – Belgium’s new premier arrived for a European Union summit on Thursday fresh from his swearing-in ceremony, exultantly bumping elbows with fellow leaders as he told them his country finally had a proper government after 652 days.

Summits of the 27-nation EU had become used to a “caretaker” Belgian prime minister since December 2018 when the ruling coalition collapsed, leading to Belgium’s longest ever stretch without a government.

But Alexander De Croo, a Flemish liberal who had served as acting finance minister in the caretaker government since an inconclusive election 16 months ago, was sworn in on Monday just five hours before sitting down with EU leaders.

“I’m very happy to be here and to meet my colleagues for the first time, I’m happy to announce in Belgium we finally have a new government,” he told them.

Belgium’s deep decentralisation and linguistic divide between Flanders and the French-speaking Wallonia have often delayed forming a government. After a 2010 election, the country took a world record 541 days to assemble one.

During the latest hiatus, interim premier Sophie Wilmes was criticised for her handling of the coronavirus pandemic in the country that is home to EU institutions and NATO.

Beyond containing the pandemic, which has killed more than 10,000 people in the country of 11 million, De Croo’s seven-party coalition will face the challenge of reviving an economy that contracted by 14.5 percent in the second quarter of 2020.

As he seeks a vote of confidence in the Belgium parliament on Saturday, his government has attracted attention for being the country’s first gender-balanced one. Wilmes became Belgium’s first female foreign minister while women were appointed as interior and defence ministers for the first time too.