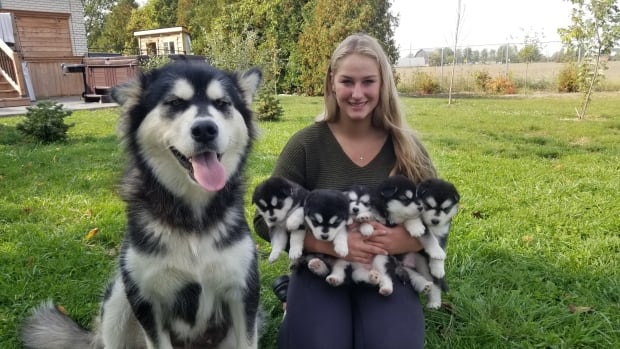 The demand for dogs during the pandemic has been at an all-time high, something that local dog breeders are taking advantage of.

Though they aren’t yet born, Doodle Trails LaSalle breeder Krystina Rappe is already selling dogs for 2021.

She’s been selling her standard pure-bred poodles and golden doodles for $1,500, though she said she will be increasing the price so that it’s closer to $2,000. This isn’t necessarily due to the demand, she said, adding it’s because “we feel what we provide is worth it.”

In Essex County, 15-year-old Karlie Vriesema may be new to dog breeding but that hasn’t stopped her from hiking up the price tag on her pups to match the going rate.

Vriesema’s Alaskan malamutes are being sold for $2,500 — a price that she says is based off the price other breeders set, due to the demand for a puppy.

Yet prior to the pandemic, the novice breeder said her dogs likely would have been priced $1,000 cheaper.

“I started looking at prices on Kijiji and they were close to $1,000 and then they were slowly rising going through the summer and then I determined my price from there,” she said.

She says she believes what the market is seeing is COVID-19 related.

“A lot of people are interested in getting something to comfort them or give them something to do while they’re in quarantine to make them less lonely.”

Breeders aren’t the only ones benefiting from the local demand for dogs.

Melanie Coulter, executive director of Windsor/Essex County’s Humane Society, says since the pandemic began the humane society has seen an increase in people wanting to adopt and foster dogs.

“When the pandemic first started we, like pretty much every shelter in North America, received an overwhelming number of offers to foster pets for people who were suddenly home with time on their hands and what we’ve seen is that has continued … [and] our demand to adopt has been quite high,” she said.

‘It is kind of scary as a breeder’

Though Coulter said she thinks people are putting thought into adopting or fostering before they take on an animal, her concern is what happens to the animal if people’s situations change.

“We obviously wanted to make sure when people were looking to foster or adopt during the height of the pandemic that people were thinking long-term … what we’re more concerned about is that people’s situations are going to change when they have had a dog maybe longer-term and [are] maybe not able to take care of them, so that’s the trend we’re hopefully not going to see,” she said.

Rappe, who’s been breeding dogs for the last 15 years, shares those concerns.

Though she’s only just started her own business, Doodle Trails LaSalle, she previously worked under a Toronto breeder and says she didn’t expect having to create a wait list nor that she’d have 30 people on standby for a dog.

She said she agrees that the market has gotten out of hand due to the pandemic, with some dogs selling for $3,000 and her own golden doodles “flying off the shelves.”

“It is kind of scary as a breeder, even though it’s positive in the moment, it’s scary because we obviously don’t want our puppies to be re-homed, people realizing ‘oh I really can’t handle this’ … or those dogs ending up in a shelter … so we are being really careful with it,” she said.

Rappe added that her business has an extensive application process so she can rigorously screen candidates and in her contract it states that she has the first right to buy the dog back.

This level of demand, she said, also has her worried that sellers might breed their dogs unethically and said buyers should look at breeding standards, such as whether the seller is doing health checks and the condition the dogs are living in.