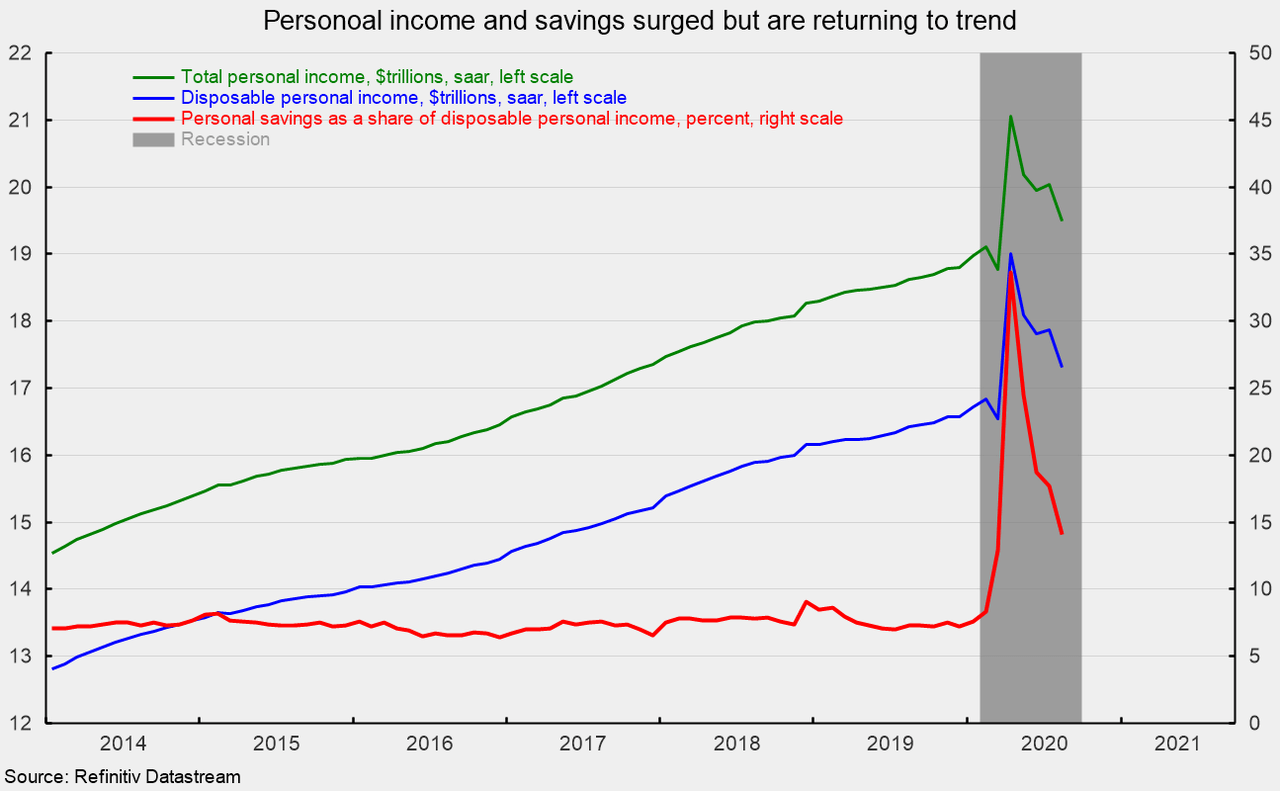 Personal income fell 2.7 percent in August, according to data from the Bureau of Economic Analysis. Personal income data over the past six months have been sharply distorted by lockdown policies which caused massive layoffs, and government stimulus programs that sent transfer payments skyrocketing. As those payments fade, measures of personal income and components are returning to trend.

Disposable personal income fell 3.2 percent after a 0.3 percent increase in July. The personal savings rate fell in August, coming in at 14.1 percent of disposable income following rates down from 17.7 percent in July and a peak of 33.6 percent in April (see first chart).

Proprietors’ income jumped 2.7 percent for the month following a 1.2 percent rise in July while income on assets (interest and dividends) rose 0.2 percent in the latest month. Since February, these two components are still off 5.7 percent and 3.4 percent, respectively (see second chart).

On the spending side, total personal consumption expenditures (PCE) rose 1.0 percent in August following a 1.5 percent increase in July. Among the components, durable goods rose 0.9 percent while nondurable-goods spending fell 0.1 percent and spending on services increased 1.4 percent for the month.

Over the past year, the PCE price index is up 1.4 percent, versus 1.1 percent in the prior month. The core PCE index, which excludes food and energy prices, is up 1.6 percent from a year ago. That measure has been running at or below 2 percent since 2012.

Economic activity remains extremely distorted following the outbreak of Covid-19 and the implementation of lockdown policies to reduce the spread of the virus. As restrictions are eased, signs of a rebound in activity began to emerge but many of those signs are now slowing, raising doubts about the durability and robustness of the recovery. Massive damage has been done to the economy and with government support fading, the recovery remains highly uncertain. Ultimately, it will be the progression of the virus, the success of efforts to eradicate it, and policies implemented to deal with it that will determine the path of economic recovery.

Editor’s Note: The summary bullets for this article were chosen by Seeking Alpha editors.