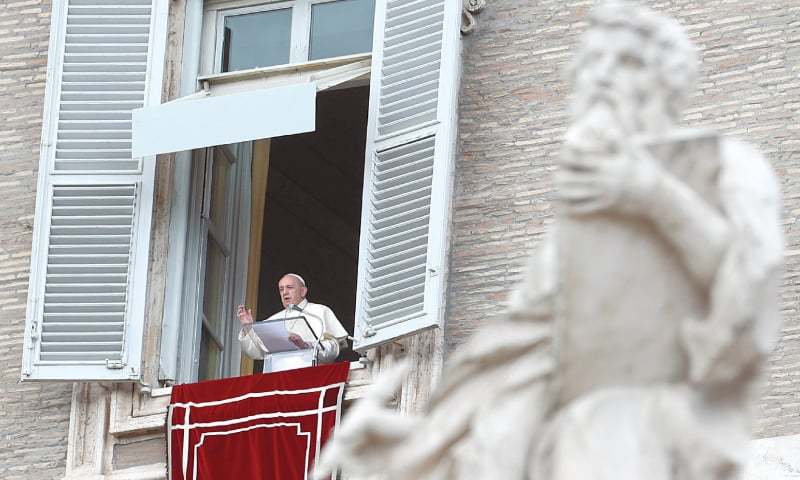 VATICAN CITY: Pope Francis said on Sunday that the Covid-19 pandemic was the latest crisis to prove that market forces alone and “trickle-down” economic policies had failed to produce the social benefits their proponents claim.

In an encyclical on the theme of human fraternity, Pope Francis also said private property cannot be considered an absolute right in all cases where some lived extravagantly while others had nothing.

In Italian, Fratelli means brothers but it is also used to mean brothers and sisters. The Vatican said it was taken from the “Admonitions”, or guidelines, written by St Francis of Assisi in the 13th century to his followers and could not be changed.

The pope says in the first line of the 86-page encyclical that St. Francis had “addressed his brothers and sisters” that way. In the document, he uses the term “men and women” 15 times and speaks several times about defending the rights and dignity of women.

Encyclicals are the most authoritative form of papal writing but they are not infallible.

The encyclical, which Pope Francis signed in Assisi on Saturday, covers topics such as fraternity, immigration, the rich-poor gap, economic and social injustices, healthcare imbalances and the widening political polarisation in many countries.

The pope took direct aim at trickle-down economics, the theory favoured by conservatives that tax breaks and other incentives for big business and the wealthy eventually will benefit the rest of society through investment and job creation.

“There were those who would have had us believe that freedom of the market was sufficient to keep everything secure (after the pandemic hit),” he wrote.

Pope Francis denounced “this dogma of neo-liberal faith” that resorts to “the magic theories of ‘spillover’ or ‘trickle’ … as the only solution to societal problems”. A good economic policy, he said, “makes it possible for jobs to be created and not cut”.

The 2007-2008 financial crisis was a missed opportunity for change, instead producing “increased freedom for the truly powerful, who always find a way to escape unscathed”. Society must confront “the destructive effects of the empire of money”.

Pope Francis repeated past calls for redistribution of wealth to help the poorest and for fairer access to natural resources by all.

“The right to private property can only be considered a secondary natural right, derived from the principle of the universal destination of created goods,” he said.

A Vatican official said the pope was referring to those with massive wealth.

The pope wrote that the belief of early Christians — “that if one person lacks what is necessary to live with dignity, it is because another person is detaining it” — was still valid.

Those with much must “administer it for the good of all” and rich nations are obliged to share wealth with poor ones. But he said he was “certainly not proposing an authoritarian and abstract universalism”.

Some ultra-traditionalist Catholics have accused Pope Francis of secretly backing a perceived plot for a “One-World Government,” a debunked conspiracy theory.

Without naming countries or people, Pope Francis condemned politicians who “seek popularity by appealing to the basest and most selfish inclinations” or who enact policies of “hatred and fear towards other nations”.

Addressing racism, a key issue in the United States following the Black Lives Matter movement, Pope Francis said: “Racism is a virus that quickly mutates and, instead of disappearing, goes into hiding, and lurks in waiting.” He repeated calls for the abolition of nuclear weapons and the death penalty, positions which have been assailed by conservative Catholics, particularly in the United States.