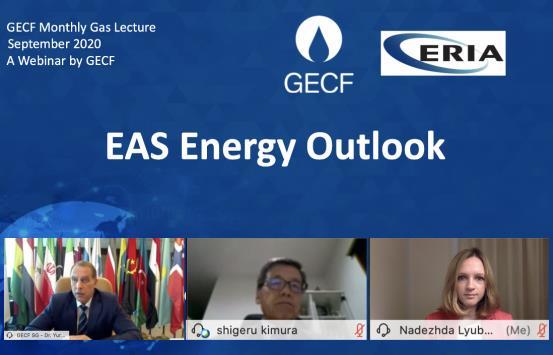 Speaking at the Doha-based GECF (Gas Exporting Countries Forum) Monthly Lecture Series on ‘EAS Energy Outlook’ held recently, Special Advisor on Energy Affairs to ERIA President Shigeru Kimura, said that unless two of its heavyweights, the US and China, take the lead on this transformation, any shift towards the low carbon society will be inadequate.

‘Further, seeing the ASEAN transition from 2017 to 2050, the region is actually increasing coal, increasing natural gas, and increasing oil, but the renewables only get a little bit rise. That is the ASEAN reality, Kimura said during the online lecture.

EAS is a regional grouping of 18 countries, which brings together the ASEAN nations and countries in the Pacific Ocean, including Australia, China, Japan, Korea, New Zealand, Russia, and the United States. The Jakarta-based ERIA has worked extensively with the EAS, particularly with its Energy Cooperation Task Force (ECTF) in driving its three major streams of promotion of energy efficiency and conservation (EEC); penetration of biofuels; and renewable and alternative power generation with research and data. ERIA also compiles the biennial energy outlook of the EAS. GECF Secretary-General Yury Sentyurin added: ‘The suggestions made regarding the low carbon society are important for the GECF because we recognise the vital and crucial role that natural gas will play in energy transition and sustainable development, as well as in post-pandemic recovery.

‘ERIA’s own projections (2015-2050) show that energy consumption in this important region of the world will increase by 2.5 times whilst power generation demand will increase by three times during the same period.

He went on to highlight that the recommended steps are in line with the 2019 Malabo Declaration of the 5th GECF Gas Summit of Heads of State and Government, which also emphasises the importance of cooperation amongst various stakeholders.

The latest edition of the EAS Energy Outlook (2019-2020) estimates that the East Asia Summit countries will witness 3.1 percent increase in economic growth annually between 2017 and 2050, while its population will increase from 3.89 billion in 2017 to 4.43 billion in 2050. At the same time until 2050, the share of fossil fuels in the EAS will be more than 80 percent in the business-as-usual scenario and 70 percent in the case of alternative-policy-scenario.

The EAS Energy Outlook also forecasts that between 2017 and 2050 the share of natural gas in the final energy consumption of the EAS region will increase from 12 percent to 14 percent.

According to Kimura, policymakers make informed decisions when they are fed the factual data. Forecasting of energy saving potential of EAS countries, thus, assumes vital importance to establish whether their EEC and renewable energy (RE) targets can be achieved.

Explaining the energy demand formulas that power the EAS Energy Outlook, Kimura pointed out that calculating energy demand is dependent on energy equipment.

‘If you have a gasoline car, you need gasoline even though the gasoline price is rapidly going up. If you need to continue to use your car all you can do is reduce your frequency. This change in frequency is an important factor in establishing the energy demand formula. As for coefficients of explanatory variables, ERIA applies the Ordinary Least Square (OLS) method, he explained.

In conclusion, his recommendation for an appropriate energy policy included promoting EEC and RE by reducing energy consumption and increasing low carbon energies, deploy the CCUS (carbon capture, utilisation, and storage), and shift to affordable hydrogen.


Legal Disclaimer: MENAFN provides the information “as is” without warranty of any kind. We do not accept any responsibility or liability for the accuracy, content, images, videos, licenses, completeness, legality, or reliability of the information contained in this article. If you have any complaints or copyright issues related to this article, kindly contact the provider above.