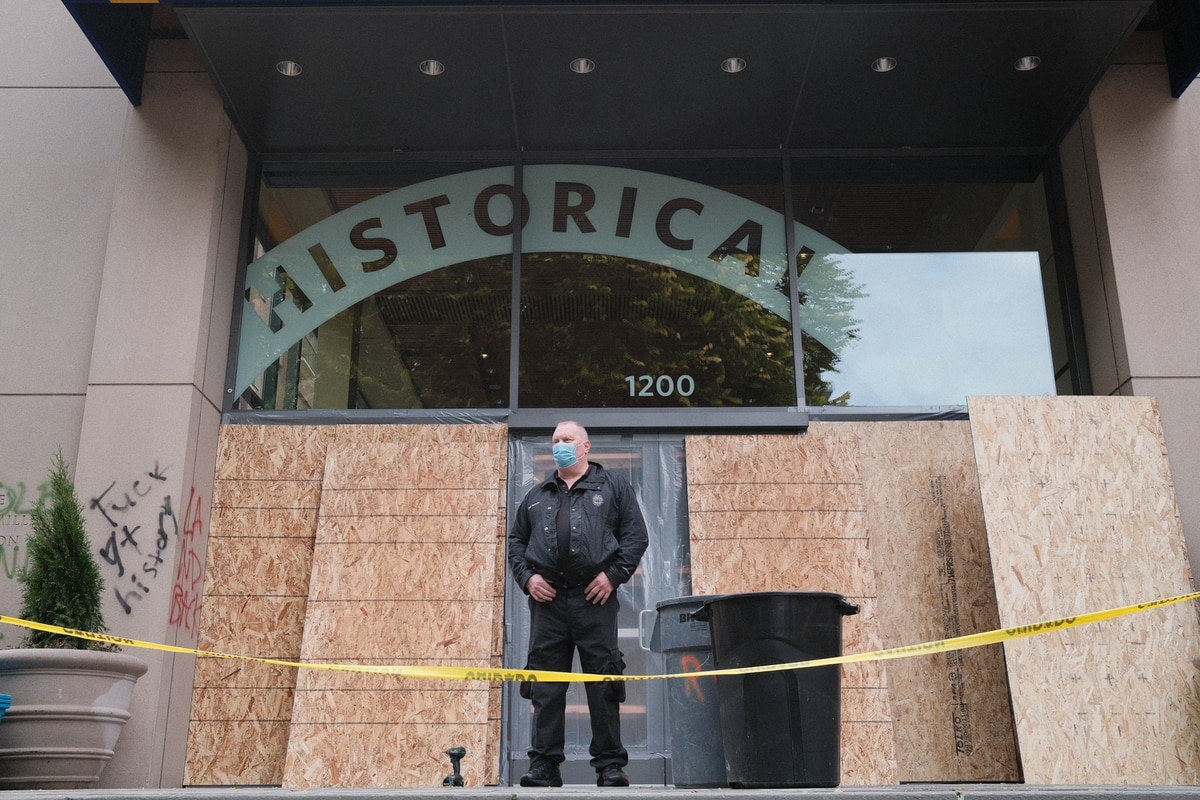 Multnomah County District Attorney Mike Schmidt this afternoon announced his office is charging two men in connection to a Sunday night riot that damaged the Oregon Historical Society and other buildings and saw a crowd pull down statues of former Presidents Abraham Lincoln and Theodore Roosevelt that have stood for nearly a century.

Schmidt’s office charged Brandon Bartells, 38, residence unknown, with one count of criminal mischief and one count of riot for allegedly driving a vehicle that toppled the Roosevelt statue, causing an estimated $20,000 in damage. (He was not charged in connection with the Lincoln toppling, which the MCDA’s office estimates did $10,000 in damage.)

The office also filed criminal mischief and riot charges against Malik Fard Muhamad, an Indiana resident, whom officials say used a steel bar to smash windows at the Oregon Historical Society and Portland State University. In addition, Muhamad is charged with the unlawful possession of a firearm. Officers recovered a gun near where they arrested him.

Oregon Historical Society Executive Director Kerry Tymchuk tells WW he was summoned to his organization’s headquarters at 1200 Southwest Park Ave. at about 9:30 last night and stayed until midnight.

He said that flares rioters tossed through the shattered windows at his organizations building left small burns on the carpet.

“We were lucky,” Tymchuk said. “The whole place could have gone up in flames.”

“I condemn all acts of violence and destruction, especially those targeting public art,” Iannarone said in a statement early Monday morning. “Our systems of government have long ignored problematic symbols and impacts of institutional racism. I am committed to changing that as mayor. People are hurting and that pain is valid. But anonymous acts of destruction outside of any agreed-upon process are toxic, unaccountable behavior that has no place in our city.”

At a press conference later in the morning, Wheeler, speaking on the controversial holiday formerly known as Columbus Day but for the past five years in Portland called Indigenous People’s Day, said the participants in last night’s incidents “co-opted what is otherwise a peaceful opportunity and instead engaged in acts of criminal destruction.”

“These acts are obscene,” Wheeler added. “As mayor I will never tolerate violence or criminal destruction.”

“It is sickening to me to see the destruction that occurred in Portland overnight,” Schmidt said. “For more than a century the Oregon Historical Society, its staff of researchers, educators and volunteers have documented, preserved and shared Oregon’s history. They have put a spotlight on white supremacy, racism, civil rights and social inequality. They have elevated the voices and stories of marginalized and under-served communities in Oregon.”

Tymchuk, who runs the Historical Society, say he’s disappointed by the damage because the museum has gone to great lengths to provide an unvarnished version of the state’s past, with a series of exhibits and publications examining racism in many forms.

“I feel some sadness that we were targeted, given the leadership we’ve shown in telling the true story of Oregon’s history, the good bad and the ugly,” Tymchuk says.

Tymchuk adds that he’s sympathetic to the anger that is driving people to Portland’s streets but he doesn’t think breaking windows and pulling down statues will help bring positive change.

“There’s a process in place for removing statutes,” he continues. “There are discussions going on across the county about that. But incidents and vandalism like we saw last night don’t advance the movement, they harm it.”