August’s government debt sell-off proved to be short-lived. Amid a flurry of central bank and economic news, 10-year government bond yields fell in September, with some pushed further into negative territory.

Italy’s 10-year bond mid-yield saw the largest decline, plunging 26 basis points to finish the month at 0.82%. Yields on Portugal and Spain’s benchmark notes also posted significant drops, decreasing by 15 basis points to 0.26% and 0.25%, respectively. While Portuguese Finance Minister Joao Leao said the economy was recovering better than expected, the European Commission still predicts a GDP contraction of 9.8% this year. Similarly, Spain’s GDP is expected to contract by 10.9% this year, however, the country’s Economy Minister Nadia Calvino forecasted an expansion of more than 10% in the third quarter.

Meanwhile, the German 10-year Bund yield fell by nearly 12.5 basis points to close at -0.53%. Data from Germany’s Federal Statistical Office showed that consumer prices were expected to decline by 0.2% in September. The European Central Bank, which left interest rates and stimulus programs unchanged at its latest meeting, said it would monitor the stronger euro. According to President Christine Lagarde, the ECB would follow the Federal Reserve’s lead to allow for an inflation target overshoot.

Across the Atlantic, the U.S. 10-year Treasury yield dropped by nearly 2 basis points to 0.68%. The Federal Reserve maintained the federal funds target range near zero and indicated it would remain there until at least through 2013. Specifically, the Federal Open Market Committee stated it would keep rates on hold until it achieves “maximum employment and inflation at the rate of 2% over the longer run”.

In the Asia-Pacific region, the mid-yield on Australia’s 10-year note dropped by 15.5 basis points to end the month at 0.82%. The AIG Australian Performance of Manufacturing Index declined 2.6 points in September for the second consecutive month. In Japan, 10-year benchmark bond yields decreased by 3 basis points to 0.01%. After winning the leadership of his ruling Liberal Democratic Party, Yoshihide Suga was elected prime minister, taking over from Shinzo Abe. 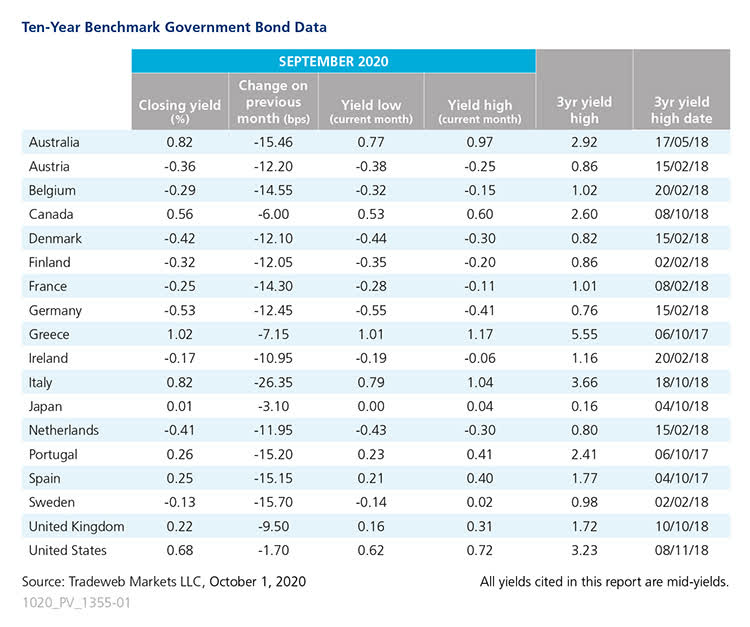 Editor’s Note: The summary bullets for this article were chosen by Seeking Alpha editors.