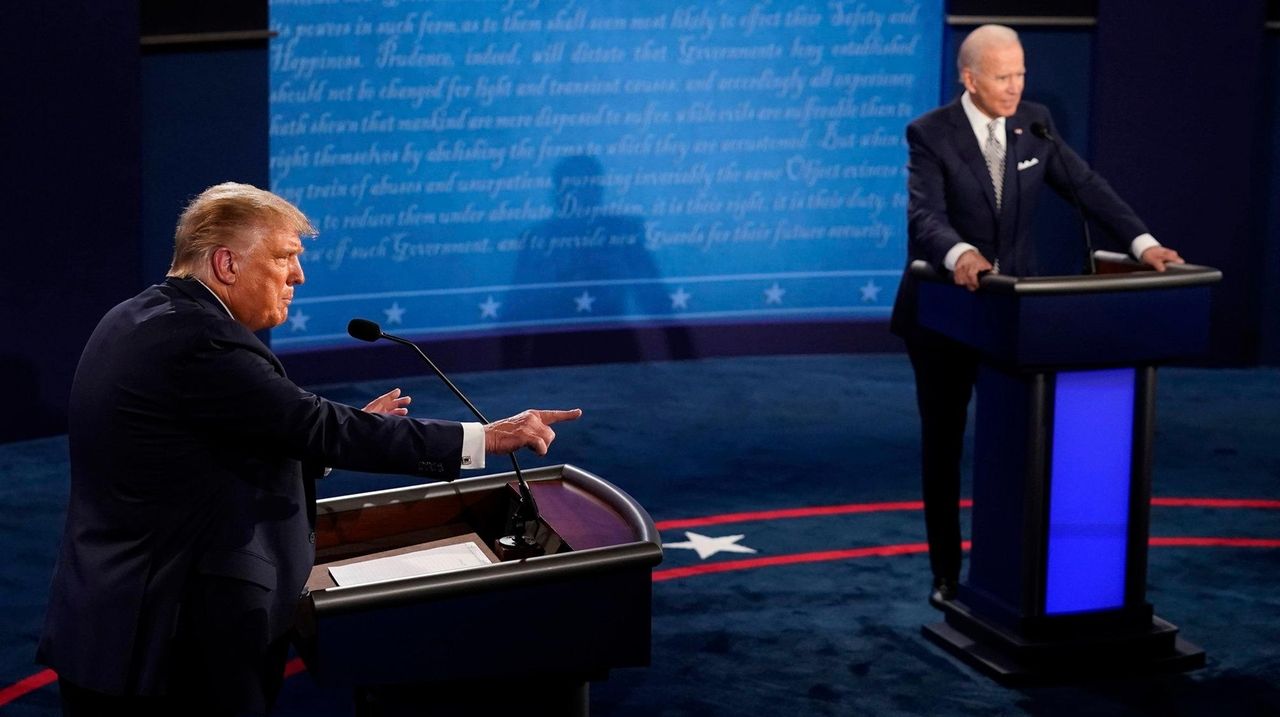 It won’t be known right away whether the first of three scheduled presidential debates will alter the shape of the race that finds Biden with a steady though not impregnable lead. But it gave affirmation that the corrosion of civil democratic discourse is one more reason that 2020 is a most awful year.

Near the end, Wallace asked both candidates if they would urge their supporters to remain calm if it took time beyond Election Day to count all the votes and determine who won. Biden said yes. Trump refused, launching into attacks on mail-in balloting and accusations of voter fraud. “I’m urging my supporters to go into the polls and watch very carefully,” the president said without elaborating.

To a question of race relations, Trump pivoted quickly to his law-and-order message and taunted Biden, charging he wouldn’t say the words. Biden said he wanted “law and order with justice where people get treated fairly.” Trump danced around a question from Wallace about whether he was willing to condemn white supremacists and militia groups that have appeared at protests while supporting his candidacy.

“I would say almost everything I see is from the left wing, not the right wing,” Trump responded. Pressed further, Trump said, “What do you want to call them? Give me a name. Give me a name?” Finally, after Biden named a far-right group that has fought with protesters, Trump said, “Proud Boys — Stand back, stand by.” The president added: “I’ll tell you what, somebody’s got to do something about antifa and the left.”

Get our inside look at the White House and goings on in the Donald Trump administration.

Asked why voters should choose him again, Trump defended his record on the military and touted his aggressive efforts to install conservative judges on federal courts.

The former vice president slammed Trump’s management of the coronavirus crisis, which has now claimed more than 205,000 American lives, for a failed strategy, a disregard of scientific advice and refusing to consistently encourage such measures as wearing masks.

Trump mocked Biden’s mask usage and rejected the Democrat’s accusations that he is endangering supporters by resuming mass rallies. “If you could get the crowds, you would do the same,” Trump said.

Throwing one of Trump’s past remarks minimizing the pandemic back at him, Biden said, “It ‘is what it is’ because you are who you are.” Trump contended that under Biden, the deaths would be in the millions.

Substance to chew on

Rejecting Trump’s depiction of him as a “socialist” captive of the “radical left,” Biden pointed out that he beat Bernie Sanders in the primary, doesn’t favor a “Medicare for All” plan eliminating private insurance and has his own plan to combat climate change that is distinct from the progressives’ “Green New Deal.”

Trump made a rare acknowledgment that human-generated greenhouse gases contribute to climate change, but he opposed measures he said would be bad for the economy.

The president kept raising allegations about the business dealings of Biden’s son Hunter in Ukraine. The former vice president called the stories “discredited.” When Trump went on to refer to Hunter’s discharge from the military “for cocaine use,” Biden said, “My son, like a lot of people you know at home, had a drug problem. He’s overtaken it. He’s fixed it. He’s worked on it, and I’m proud of him.”

With the future of Obamacare on the line at the Supreme Court, Trump insisted to a skeptical Wallace he has a comprehensive replacement plan and claimed to have brought down drug prices. “Insulin … I’m getting it for so cheap, it’s like water,” he said. In reality, only a small segment of seniors is getting that break. Insulin still retails for roughly $300 a vial.

Republican pollster Frank Luntz put together a focus group of undecided voters and asked them to concisely describe Trump after his performance. With rare exceptions, “every single word was negative,” observed Politico’s Tim Alberta.

One said Trump behaved like a “crackhead.” Another said obnoxious and unpresidential. Others described the president as being “un-American” and “arrogant.” In all, from 17 voters in swing states, 15 used negative words and just two used positive words or phrases to describe the president. That’s counting “an ass but a confident ass” as one in Trump’s column.

Most rated Biden’s performance positively, and several said he was sharper than they expected him to be.

To watch the debate in its entirety, click here. There’s a full transcript — not that it’s any easier to read than watch. The CNN fact-check also is a slog because Trump, mainly, said a lot that had to be examined.

With Trump trying to spin away revelations of his tax-avoidance history, the Biden campaign decided Tuesday was a good time to release the former vice president’s 2019 tax returns.

They showed Biden and his wife, Jill Biden, paid nearly $288,000 in federal income taxes on adjusted gross income of $985,000 — an effective rate of about 30%. With the release of their 2019 returns, the Bidens have now made public 22 years of tax documents, dating back to the late 1990s, when he was a U.S. senator representing Delaware.

The campaign also released filings for his running mate, Sen. Kamala Harris, showing she and her husband, attorney Douglas Emhoff, paid $1.19 million in federal taxes on about $3.1 million in income. That translates to a tax rate of about 38%.

Bedingfield said the documents show “a historic level of transparency meant to give the American people faith, once again, that their leaders will look out for them and not their own bottom line.”

The New York Times reported Sunday that it obtained tax data showing Trump paid just $750 in federal personal income taxes for 2016 and 2017 — the year he ran for president and his first year in office. In 10 of the past 15 years, he paid zero.

Hours before the Biden documents were released, Donald Trump Jr. told Fox Business Network that his dad is “following the tax code that people like Joe Biden, who has been in D.C., for 47 years, have written. He’s playing by their rules. Joe Biden is taking advantage of the same loopholes.” That last sentence didn’t age well.

Nearly each day, even in the late stages of this national campaign, ugly details are added to the Trump administration’s broad portfolio of scandal and controversy, writes Newsday’s Dan Janison. The election race only highlights the stakes involved.

Take the White House treatment of the pandemic as a public-relations problem. Olivia Troye, until recently a Republican aide to Vice President Mike Pence on the coronavirus task force, described how the administration bent health data to suit Trump’s agenda of reopening schools, no matter what, before mail-in voting began.

Amid new details of the depth of Trump’s personal indebtedness, Sen. Elizabeth Warren (D-Mass.) unsurprisingly said of Trump: “He may be vulnerable to financial blackmail from a hostile foreign power and God knows what else.” Ethics experts agreed.

A show of favoritism for Trump insiders continues freely at the Justice Department. These increments and more, on several scandal fronts, keep piling up. Do they add up to a single swamp of corruption, or incompetence? That’s one thing for voters to decide.

Heard this one before — that Trump’s debate opponent was wearing a hidden earpiece to get answers? You may have. The Trump camp circulated those unfounded rumors about Hillary Clinton in 2016, and they were at it again Tuesday, demanding that Biden undergo an ear inspection. That was in addition to Trump’s insistence on a test for supposed debate-enhancing drugs.

Trump campaign spokesman Tim Murtaugh went so far as to accuse Biden’s campaign of agreeing to an aural exam for both candidates and then reneging. The Democrat’s staff said that never happened, nor did they ask for breaks every 30 minutes during the debate, as Trump’s team claimed.

Biden’s deputy campaign manager Kate Bedingfield made what sounded like a tongue-in-cheek counter-accusation.

“If we’re playing that game, then you know, the Trump team asked Chris Wallace not to mention the number of deaths from COVID once during the debate,” she said. “You can consider that confirmed from the Biden campaign. See how easy that was to try to throw up a distraction?”

Murtaugh huffed: “This is a lie and it never happened.” Bedingfield said Trump’s staff “seems concerned that he will not do well tonight, and they’re already laying the groundwork for how they’re going to lie about why.”

Biden holds an 11.3-point lead over Trump among likely voters nationwide, and has a 20-point edge over Trump among suburban voters, according to Hofstra University’s new Kalikow Center poll.

The survey found Biden favored by 53.2% to Trump’s 41.9%, while 5% of respondents prefer “someone else.” The results from suburbs “strongly implies” that such voters “are breaking for Biden,” the poll authors wrote. Among suburban women, Biden led 58.3% to 38.6%.

The Kalikow Center for the Study of the American Presidency collected responses from 2,000 likely voters, from Sept. 14-22. For more, see Newsday’s story by Scott Eidler.

See a roundup of the latest pandemic developments from Long Island and beyond by Newsday’s reporting staff, written by Bart Jones. For a full list of Newsday’s coronavirus stories, click here.

What else is happening: