More than 1,000 family-run coach businesses across the UK face being forced into bankruptcy and having their vehicles repossessed, according to their trade body.

Since March, close to 100 coach businesses have gone into administration and many more are on the brink as demand for their services has “almost totally collapsed”, said Graham Vidler, chief executive of the Confederation of Passenger Transport.

More than 24,000 people employed in the industry could be out of a job by April 2021 if financial help for the sector is not forthcoming from the government, he added.

The roll out of chancellor Rishi Sunak’s new job support scheme, which will replace the furlough programme in November and requires employers and the state to top up the wages of staff working at least a third of their usual hours, will only help coach operators providing school bus services, which account for about 15 to 20 per cent of industry revenue, said Mr Vidler.

Operators that rely on international and domestic tourism — which have dried up since the start of the pandemic — are unlikely to have enough work for drivers to benefit from the scheme.

Alongside big players such as National Express and Stagecoach, the UK coach industry is made up of about 3,000 smaller operators, 80 per cent of which are family run.

Unlike the bus sector, which runs scheduled services and has received hundreds of millions of pounds from the government since the outbreak of the pandemic, the coach industry has not received sector-specific support.

In June, 550 operators wrote a letter to Mr Sunak asking for a cash injection worth £65m a month to help the industry cover its costs for the rest of 2020.

However, the Treasury pointed them to existing schemes. “Businesses across all sectors — including the coach industry — have had access to our generous and wide-ranging package of support,” it said. “We’ve also introduced a package of other support measures, including bounce back loans, tax deferrals, business rates holidays and more than £10bn of grants.”

Only 15 per cent of coach operators were able to access the Treasury’s small business grants, said Mr Vidler, while the vast majority who applied for the coronavirus business interruption loan scheme were rejected as unviable. And although most coach companies work with domestic and international tourists, they are not classed as part of the leisure industry so have been unable to apply for funding via the government’s retail, hospitality and leisure grant.

In August, the Department for Education allocated £40m to local authorities to help procure extra vehicles, including coaches, to accommodate social distancing policies on public transport for the reopening of schools. Yet many operators say they have been overlooked, and that money earned from schools will not be enough to prop up the industry.

With next to no income as a result of the pandemic, many businesses say they face disaster. Individual finance holidays agreed with lenders are set to expire by the end of October, leaving operators facing expensive loan repayments. The CPT is asking for the measures to be extended by another 12 months. 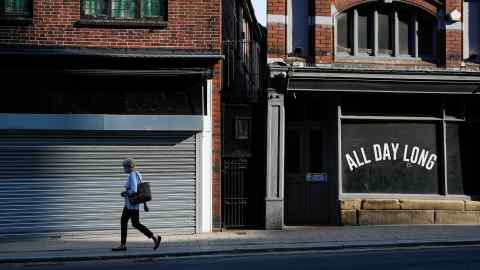 Candice Mason, owner of Mason’s coaches in the Hertfordshire town of Tring, said she had borrowed more than £1.3m in the past three years to ensure her fleet of coaches met new environmental and accessibility standards.

Business had been good pre-Covid but with passenger numbers down 98 per cent year-on-year and losses amounting to £68,000, Mason estimated she would need at least £180,000 to keep her business going until April next year.

“We have coaches that were valued at £170,000 last year that are now worth £50,000. If we go under, I will have to make up the difference myself with the finance company.”

With the public wary of taking coaches, despite companies ensuring that vehicles meet new hygiene standards, with regular scrub downs and capacity limited to about 50 per cent, many say they cannot survive.

Jenna Rush, owner of North East Coach Travel, which she runs with her father and sister, said the government’s new job support scheme “does not help us at all” and said she will be “making redundancies if no work comes in by November”.

She added: “What’s frustrating is that families can get off a service bus outside and walk in [to venues] but coach companies, because they look like group bookings of 30 rather than lots of two or three person parties, are not being given the same allowances.”