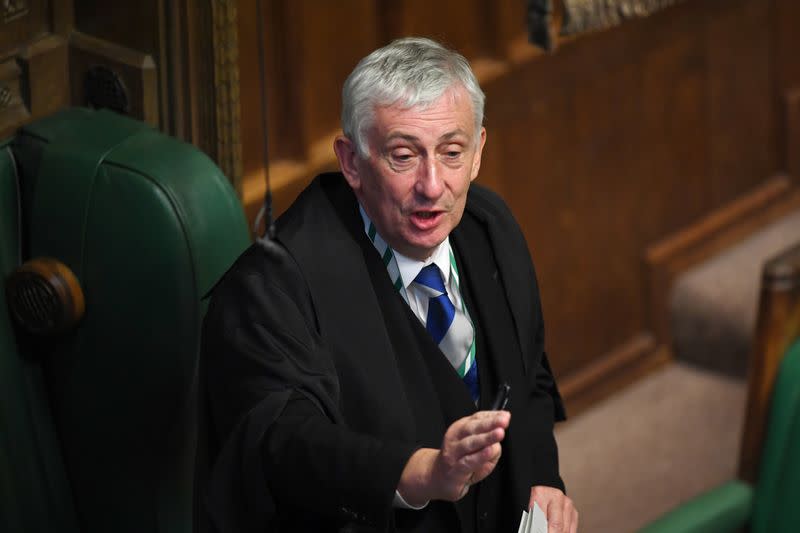 LONDON (Reuters) – Britain’s parliamentary Speaker reprimanded Prime Minister Boris Johnson’s government on Wednesday for disregarding the House of Commons with its COVID-19 measures, calling on ministers to better include lawmakers in their decisions.

But Lindsay Hoyle decided against allowing lawmakers the chance to consider a so-called amendment to a vote on the extension of emergency laws to impose restrictions that would have made sure parliament played a greater role.

Several lawmakers from Johnson’s own Conservative Party have threatened to rebel against the government over renewing the Coronavirus Act, which some said had allowed it to govern by diktat and deprive people of their civil liberties.

“The way in which the government has exercised its powers to make secondary legislation during this crisis has been totally unsatisfactory,” Hoyle told parliament, adding some explanations the government had offered on why it had bypassed parliament showed a “total disregard” for lawmakers.

“The government must make greater efforts to prepare measures more quickly, so that this House can debate and decide upon the most significant measures at the earliest possible point,” he added.

A rebellion would dent Johnson’s authority and ministers have been trying to defuse any revolt by promising parliament they would involve it more.

A spokesman for Johnson said the government was “looking at further ways to involve parliament in the process in advance …I think at the same time it does remain vital that we can move quickly to stop the virus spreading.”

Health minister Matt Hancock will address parliament later when he will set out the government’s plans.

Hoyle said he sympathised with lawmakers’ concerns, but could not allow parliament to vote on an amendment by senior Conservative Graham Brady which would have forced the government to get parliamentary approval before any more national restrictions were imposed.

“I now look to the government to rebuild trust with this House and not treat it with the contempt that it has shown,” he said.